Embankments and slopes are a landscapers dream because they can be sculptured into the most beautiful environments.

My crew has spent the last several months working on such embankments. We used common sandstone rocks to retain and beautify. This we did using the dry-packed method of retaining. This differs from built walls and stone cladding in that no cement is used and there is no need for foundations or grouting as gravity holds the rocks in place.

Dry packing is a clean process with no waste or mess unlike that produced by stone-masons when they are preparing rock for cladding. In true dry packing we do not break the rock up into slivers. The rocks remain in their natural state and put together like a puzzle.

We use rocks in manageable sizes from grapefruit upwards to rugby-ball sized specimens. The embankment is cut at 110 degrees or at least angled backwards. The larger sized rocks are set in a shallow furrow and dug in along the base of the embankment to prevent future slippage at this point. Once the foundation layer is installed other rocks are then placed on top in rows. Be sure to use bigger rocks along the lower rows and the smaller rocks nearer the top of the wall.

This simple procedure requires a fair amount of skill and concentration because setting or pointing rocks is like putting a puzzle together. Put the wrong rocks together and it looks awkward and unstable. Put the right rocks next to one another and the whole construct appears solid and secure. The larger rocks set in the lower levels of the wall give the structure weight and balance. Real dry-packing can retain embankments up to a meter if done correctly.

Wild untamed embankments are often dead-zones for gardeners. This need not be the case. They are wonderful opportunities to create planted terraces rock walls and stairways. The embankment soil is shaped and moulded ahead to allow for curves and slopes. We then clad the embankment with our sandstone rocks and embed new gum sleepers on the slopes for the steps and garden paths.

Home owners on sloping properties that have abundant sandstone rock are the lucky ones for they have the building blocks for magnificent possibility. 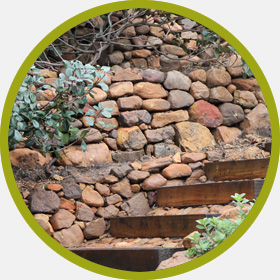